In October 2013, Adyar Accountant, Mr M Kannan was threatened with police action by Adyar Estate General Manager, Mr S Harihara Raghavan if he did not move a car that was parked outside his quarters on the Adyar Estate, even though the car wasn’t his.

An untaxed was car parked outside Mr Kannan’s quarters, on the Adyar Estate, and this is a civil and not a police matter. The car, as Mr Kannan states, did not belong to him, and therefore he appeared to be being threatened with police action over a vehicle parked off the highway that, in any case, was not his responsibility.

The car’s owner was a member of the Theosophical Society and possibly someone that Mr S Harihara Raghavan was unable to push around. I’m not sure of the legal position but as he was not the owner of the vehicle, Mr Kannan may have had no legal right to remove it. Mr S Harihara Raghavan may also have had no legal right to remove the vehicle, and found it more convenient to coerce Mr Kannan into doing so, by threat of police action.

Mr Kannan makes reference to the car and the related threat of police action in his letter to Tim Boyd of May 15th 2014.

Here is Mr Harihara Raghavan’s letter to Mr Kannan about the car parked outside his quarters. Although the letter appears to acknowledge that the car does not belong to Mr Kannan, there is an ominous threat of police action, if it is not moved. 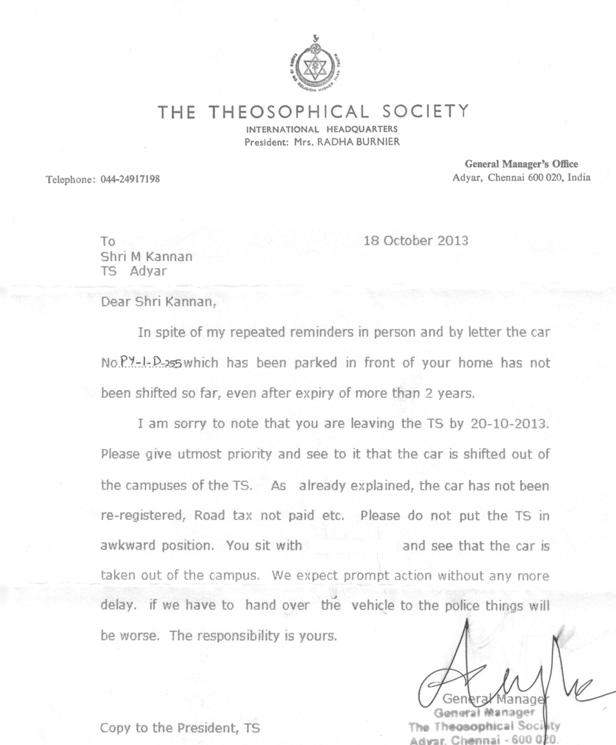 The threat of police action fits in with the allegations made by Mr Kannan in his letter and email.